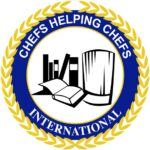 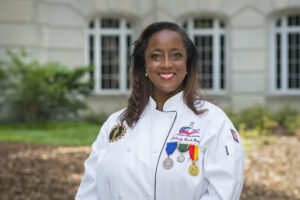 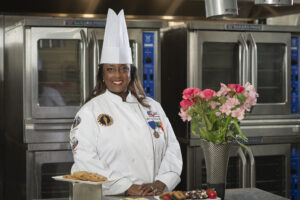 For more than the past three decades, Chef Kimberly has remained an active member of the American Culinary Federation (ACF), of which she was elected president in 2021 for a two-year term. Prior to that, she served two two-year terms on the ACF board as Vice President, Southeastern Region, which is the second largest ACF region representing eight Southeastern states as well as the U.S. Virgin Islands, Puerto Rico, the Bahamas, and Jamaica. Chef Kimberly became the first woman chef of color elected to the ACF board in 2017, and she is the first woman chef of color and first pastry chef to have been elected ACF president.

Chef Kimberly’s journey as a professional chef began in 1981 while completing an ACF-accredited apprenticeship program at Dallas’ El Centro College, where she was later inducted into the college’s Chefs Hall of Fame in 2015. During her career, Chef Kimberly has worked as an executive chef and pastry chef in the hospitality, healthcare, and corporate settings, and she has served as an adjunct professor at Trident Technical College and Johnson & Wales University, both in Charleston. The award-winning chef has also participated in a variety of ACF-sanctioned competitions, has served on the ACF’s Southeast Region ethics committee for several years and was instrumental in the development of ACF’s Certified Culinary Administrator certification.

The self-published author of “Here I Am! Chef Kimberly’s Answer to the Question ‘Where Are the Female and Minority Chefs?” Chef Kimberly remains dedicated to supporting women, minorities and other members of the culinary community and beyond. She spent 10 years as a guest chef for two local television shows, WCIV (ABC 4) TV’s “Lowcountry Live” and WCSC (CBS 5) TV’s “Coffee With” cooking segment, and she remains a regular speaker at a variety of industry events and conferences.

Meet the rest of the team at https://chefshelpingchefs.com/meet-the-team/